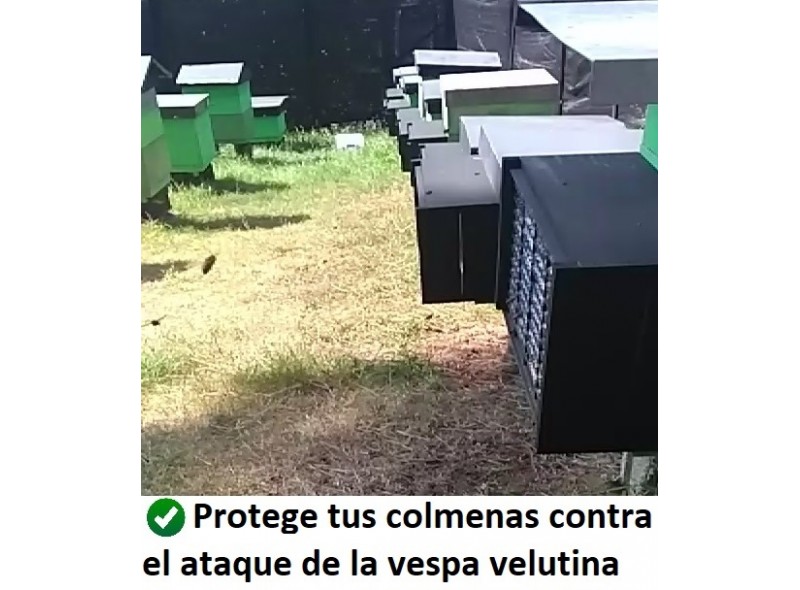 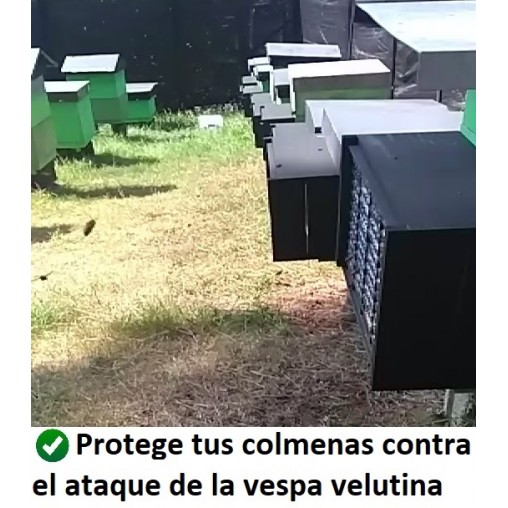 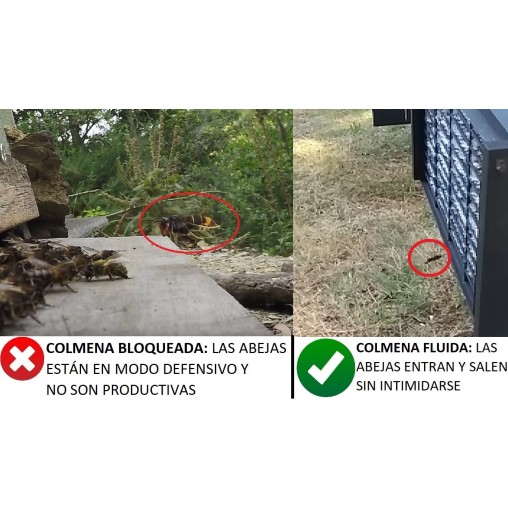 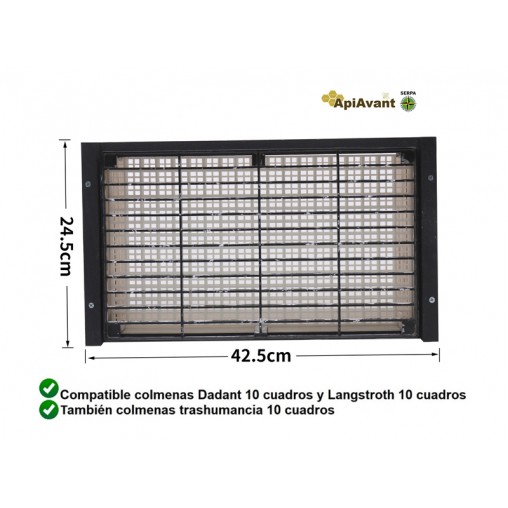 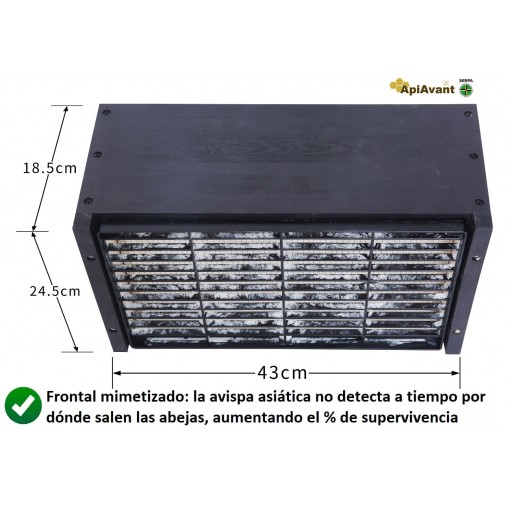 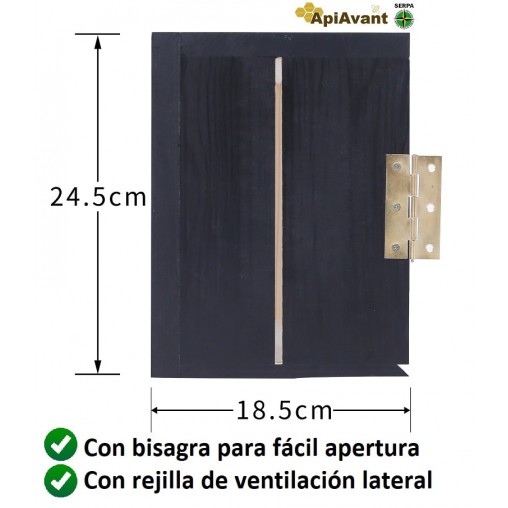 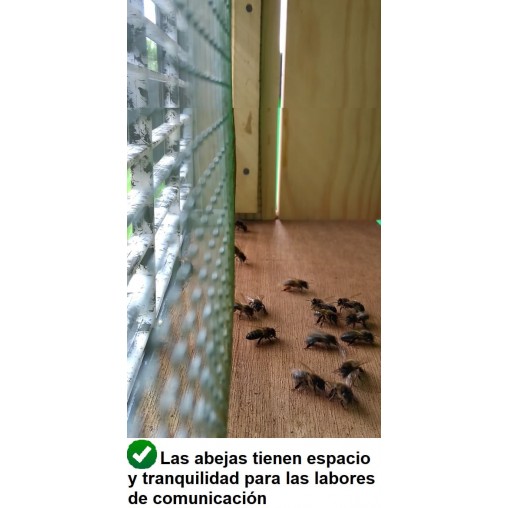 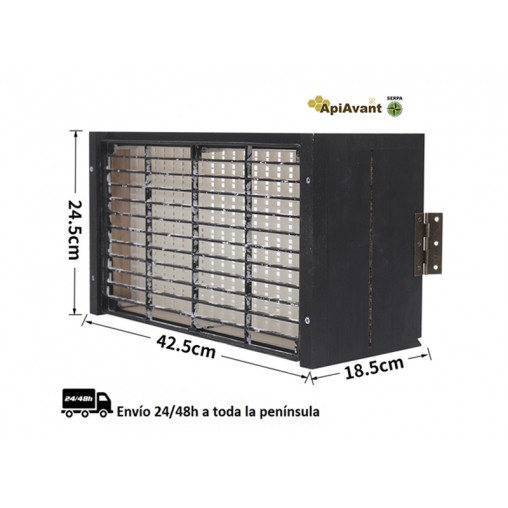 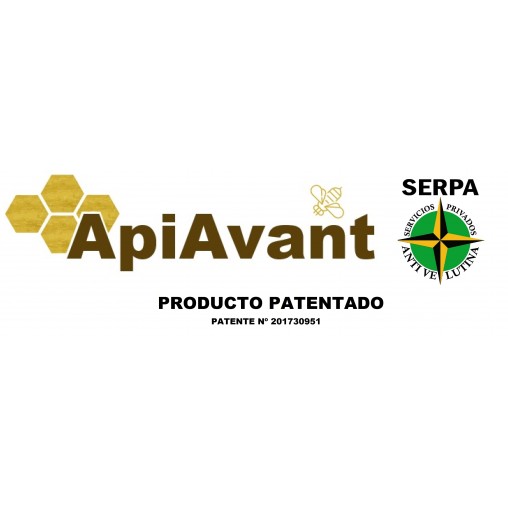 Hive protector against Asian wasp and prevention of varroa

€29.90 IVA incluido
LIMITED UNITS!
Tested for 3 years by GRUPO SERPA, company specialized in elimination of the Asian wasp
Compatible with 10 frame Dadant and 10 frame Langstroth hives (also transhumance). Made of pine wood.
1. Protect from the Asian wasp: vespa velutina nigrithorax cannot enter
2. Great acceleration: bees come and go at high speed
3. Mimetized: black-white painted front
4. Sonic effect: Asian wasp believes that it is before a major swarm
5. Thermal effect: better store temperature
6. Help to prevent varroa: prevents bumblebee from entering (potential carrier)
7. Bees enter and leave with total fluidity
In the event that the queen has already given order to hibernate, then it will be very difficult for the hive to unlock

Share
Ratings and comments from our customers
( 5.0 / 5) - 2 feedback(s)
Display details of ratings
5 star (s)
2
4 star (s)
0
3 star (s)
0
2 star (s)
0
1 star (s)
0
Tested for 3 years in Viveiro (Lugo) by GRUPO SERPA, a company specialized in the elimination of the Asian wasp (Vespa velutina).
Compatible with 10 frame Dadant and 10 frame Langstroth hives (also transhumance). In the case of Langstroth 10 transhumance frames, depending on the type of manufacturer, the hive's front grip must be removed.
If it is installed in June - July, it will offer the hives a great fluidity to the bees both to enter and to leave, and will prevent the hives from being blocked by the attack of Asian wasps. Thanks to its external mimetized multilevel filter, the bees enter and leave without being detected in time by the Asian wasps, which increases the success rate of the bees and tires the Asian wasps, which fly statically and inefficiently against the hives. If it is complemented with traps on the sides, the velutins will choose to enter the traps (especially at the beginning and end of the day).
The protective module against the attack of the Asian wasp also helps maintain the temperature of the hive, especially at the beginning of the day and in the last hours of the day. It also helps to maintain the temperature of the hive during the autumn and winter months.
In addition, it prevents other insects, animals and rodents from entering. It also prevents the entry of the common bumblebee (called bombus terrestris), which is considered a potential carrier of the varroa mite.
Attention: as of August, if the protective module has not yet been installed, there is a real risk of blocking the hive. In the event that the queen has already given the order to hibernate, then it will be very difficult to unlock the hive with any means. In these cases, it will be essential to protect the integrity of the hive with the protective module and that physically the Asian wasp cannot enter the hive and loot the hive (velutina also ends all honey, with the consequent economic losses that this entails ). Thus, the anti-Asian wasp protective module will protect the hives throughout the year, preventing the Asian wasps from entering the hives and sacking them (it also protects the honey).
The anti-Asian wasp protective module will be uninstalled at the beginning of spring (March) so that all drones have the same possibility of mating with the queen. The anti-Asian wasp hive protective module will be installed from June.
For a greater percentage of success in the protection of the hive, it is recommended to complement the protective module of anti-velutin hives with traps on the sides of the hives. The complementary use of traps will aim to reduce the pressure of siege from Asian wasps to hives.
The anti-velutin hive protective module offers these advantages:
1. Protects from the Asian wasp, hornets, bombus (potential carriers of varroa) and other insects, animals and rodents, creating an environment of safety and non-intimidation (the swarm works with a normal flow although the Asian wasp be outside). It prevents the Asian wasp from entering the hive and sacking it (the Asian Wasp also loot honey from the hive, so that this can lead to serious economic damage). Keep in mind that, in the event that the queen has already given order to hibernate, then unlocking the hive will be very difficult with any means.
2. Great acceleration of the bee successfully leaving the hive, while the Asian wasp is flying static outside (with the bees coming out and entering the hive successfully)
3. Mimetized: the colors and the way to paint the front filter make it difficult for the Asian wasp to see in time where the bees leave, significantly increasing the chances of the bees to escape successfully.
4. Sonic effect: the “sound box” effect is created, making the wasps believe that they are facing a large swarm of bees and keeping the wasp out with a static and inefficient floating flight for the wasp (the wasp normally he dares not enter the module for fear of being attacked by what he thinks is a large swarm of bees).
5. Thermal effect: the module has a very positive temperature regulating effect for the hive, especially in autumn and winter. In summer, the two side grilles help to ventilate and acclimatize the module (in addition to the flutter that bees exert that will help lower the temperature of the module and effect a sonic effect as a sounding board that will scare away the wasps)
6. Help to prevent varroa: the module prevents the earth's bombus from entering (potential carrier of varroa). It is recommended that the module be left installed until the beginning of spring (later in February it will be removed, and reinstalled in June - July).
7. Bees enter pollen with total fluidity: bees enter with full fluidity loaded with pollen. If some pollen fell, the same bees would pick it up before nightfall.
TABLA DE COSTES DE ENVÍO

Ratings and comments from our customers