Active nests of Asian hornet in fruit trees (in September!)

These photos have been taken on September 14, 2021 in Galicia (Spain), in a rural area where there are several extensions of fruit trees. In this case the trees are specifically apple trees, but it could well be any other fruit tree.

At first glance, we can apparently approach the apple tree and do our normal activity at this time of year: start picking the apple to sell the fruit or to make cider.

But if we look more closely, among the leaves we can see hidden but very real danger: a large tertiary nest of Asian hornet (Vespa velutina nigrithorax) still active on September 14, 2021.

Zooming in a little more, we can see something unheard of: a vespa velutina that is in static flight in front of the nest entrance. The function of this Asian hornet that makes a constant floating flight is precisely to safeguard and protect the nest from any threat. In the event that this Asian wasp is threatened, it will launch an attack together with other Asian hornets against the person who is collecting the fruit.

Who do you think could be a threat to this highly active tertiary nest of velutines? Indeed, anyone who approaches a radius of less than 3 meters is in danger of being suddenly attacked by a large number of Asian hornets.

Therefore, we HIGHLY RECOMMEND that before approaching fruit trees and before handling the trees to pick fruit, a very careful visual inspection is made to see whether or not there are any velutina nests. 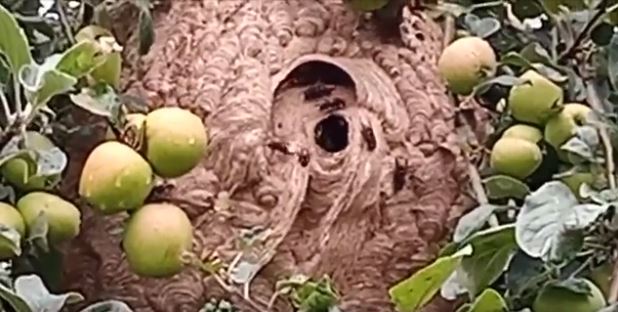 This practice can prevent serious accidents, since the attack would not only be from the wasp that is constantly flying in front of the entrance, but the attack would be made up of a large number of wasps that would seriously endanger the person or persons who were attacked. 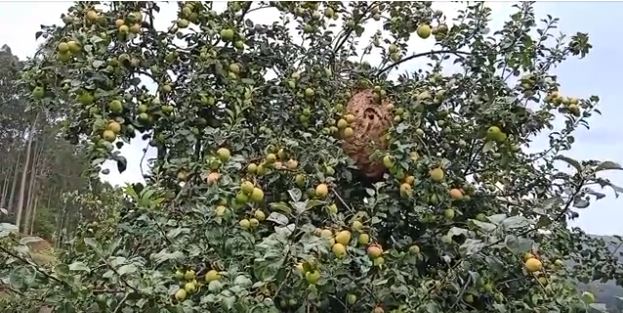 Therefore, at the time of fruit harvesting, always take the precaution of inspecting the trees in case there are Vespa velutina nests hidden among their foliage.

In the case of detecting a nest, always have the help of qualified professionals to proceed with the physical destruction of the nest.