When do you install and uninstall the hive protector against Asian wasp?

We explain the recommended dates of installation and uninstallation of the module and a detailed explanation.

-When do you need to install the hive protector module?

The beehive protection module will be installed from June / July, depending on the area and the level of attack and siege that the velvet scooter is exerting on each apiary.

But do not wait for the hives to be blocked by the presence and attack of the Vespa Velutina to install the module!

Ideally, install the module before the hives are blocked, especially recommended is its installation in June and July.

If it is observed that the hives are already in defensive mode in the presence of the Asian wasp, then we will proceed to the immediate installation of the hive protective module

We have published a very illustrative drawing (a traffic light with green, amber and red colors) that explains very clearly what positive effects the module has when installed in the different months of the year. 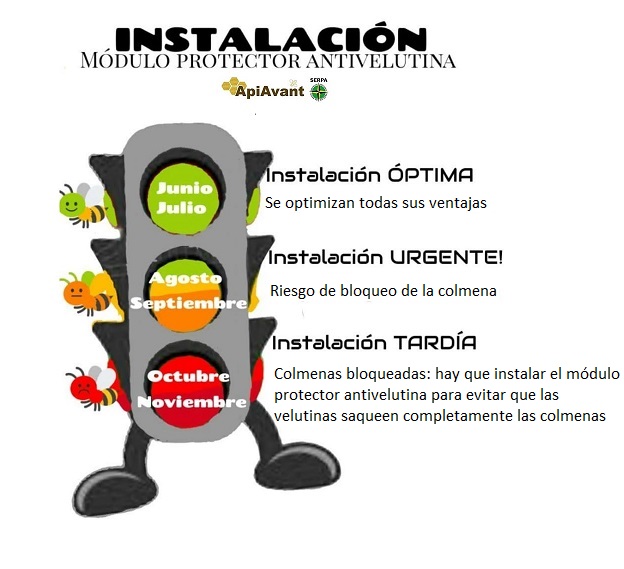 -If installed in June or July, the Apiavant-Serpa anti-velutin hive protective module offers all the advantages to hives, such as:

1. Protects from the Asian wasp: the velutin scooter cannot enter through the internal filter

3. Mimetized: front painted white-black so that the velvet scooter does not detect the bees in time

4. Sonic effect: Velutin believes it is before a major swarm and does not dare to enter

7. Bees enter and leave with total fluidity: hives are not blocked thanks to the module

-If installed in August or September, there is already a high risk of hive blockage.

-If it is installed in October or November, it is very likely that the hive is already blocked. It is essential to protect the hives and prevent the Asian wasp from entering the hive, kill the bees and the queen bee, remove all the larvae and eat all the honey.

The protective module will function as a protector against the Asian wasp, against other insects and rodents. It will also prevent the Asian wasp from entering the hive to hunt the bees and loot all the honey from the hive.

- How long should the hive protection module be left installed?

We recommend leaving it installed from June-July until the beginning of spring (March).

Keep in mind that velutins remain active in some areas until October-November (and even December). As hives are already hibernating, velutins enter hives directly and hunt bees for protein. Also keep in mind that Asian wasps can loot honey from hives, causing large economic losses to the beekeeper. To avoid this brutal looting, the hive protector module must be installed.

Likewise, we will have presence of terrestrial bombus (potential carriers of varroa), so leaving the module installed until the beginning of spring will be a highly recommended practice to help prevent varroa

It should also be remembered that the filters of the module also prevent the entry of other animals, insects and rodents.

Therefore, you have to uninstall the module before the beginning of spring and reinstall it in June-July (when the attack of velutin begins to become more intense).

This drawing with the traffic light and the installation recommendations, explains in a very summarized way the advantages that the hive protector module can offer against the attack of the Asian wasp in each month of the year.